How to Paint EPP Foam 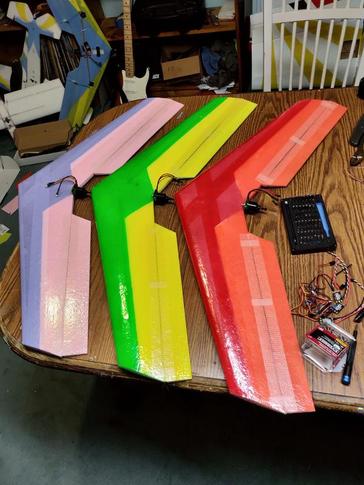 How to paint foam before laminating.

Paint won't stay stuck on the top of the laminate. If you want the color to last you need to paint the foam and laminate over the top.

When paint is put on the smooth surface of the laminate it gives a fantastic appearance and is very smooth and bright at first but it doesn't last.  You can scratch most paints off of laminate with your fingernail.

Not all foams paint well. Some foams like EPO and EPS melt with the solvent in many of the different paints.

​EPP foam can be painted with most paints but the laminate won't stick unless you have a paint that can take the heat of laminating without coming apart.

Here are some notes from RCvehicleguy from RCGroups:

​"Finally got back to work on the three rebels I'm building for my friends. Man these planes look good so far!

To make the stencil I just pinned the elevons on the wing and traced it's shape in the cardboard. I knew I wanted to make a two tone scheme so I cut the stencil to the pattern I wanted.

When painting I pinned the stencil to the wing with t-pins. I pinned on one half of the mask for the primary color then the other half when I did the secondary color. So the secondary is not layered on the primary layered the colors on my last wing and it didn't turn out very great.

I just used rustoleum spray paint. EPP foam doesn't melt with solvents so you can use whatever you want. I didn't do any 3m 77 prep before paint I just sprayed away and laminated afterwards.

Not sure how everybody does their laminating but I do the wing in 4 sections of laminate. Top left and right and bottom left and right. It makes avoiding wrinkles easy."

More information below .....  Don't forget you can down load CTH Decals on our website to make your planes look even better!!!
Here is another method of painting that was done by my son Michael.

The Assassin and Titan in the Brick Wall videos are some of his painted planes.  The laminate is still stuck even after years of serious abuse.

Michael would build the plane including the shock cord and E-tape before painting.  He then would spray the plane with a paint for Plastics like the Krylon Fusion paint below.  Other paints for plastics will also work.  He learned that acrylic paint often used in air brushes looks great on the foam but the laminate won't stay stuck because the paint peels apart.  Test your paint before spraying your core to make sure that the laminate will stay stuck to it.  You might want to paint a corner of the shipping box, let it dry and see if a scrap of laminate will stay stuck.  The heat of the iron damages some types of paint.

He would pin the elevons in place so they matched.  He liked to paint a base color or several colors on the wing and let them dry.  He then would take Duct Tape and cut out shapes of circles and squares and tape on the core on top of the original paint then paint a darker color over the top.  When he peeled off the duct tape he had unique shapes showing on the wing.

​He liked to put the laminate on the paint as soon as he could handle the plane without leaving finger prints.  He felt this made the laminate stick better.  He would use a paint for plastics.  The laminate has stayed stuck on these wings for years with his method.

Attaching the elevons would leave E-tape on the hinge line that would show but when a plane flies through at 70 mph no one seems to notice.

More information below .....  I paint some planes too!!!!
I have painted the wings of some of my Albatrosses and Pelicans with no intent of laminating.  Here are some examples:

The colors are very bright and stay bright without the laminate.  Laminate tends to reflect some of the light and dull the colors a little but no one seems to notice.

​I have gone back and laminated some of the wings and as long as the iron temperature is 220 degrees Fahrenheit  I can get laminate to stick to the painted wings as long as it is the right kind of paint.

I have also used permanent markers to outline paint and color small parts of planes to make the paint lines more distinct.  I have seen planes where the whole color pattern had been done with permanent markers.

Disadvantages of painting???  Why do I paint only about 25% of my planes?

I found that painting is a good way to add a base color but I had to be careful because it was easy to add a lot of weight behind the CG requiring weight to be added to the nose of the plane to balance the plane out.  This is true with painting both conventional planes and flying wings.

I like to have white on all my planes so even when I paint I try to leave some white foam for flight visibility.  White is a good marker color that stands out against a dark background or a blue sky.  I suggest that even when you paint you leave some white on the plane.

Paint can appear pastel and make your plane hard to see in flight.  Choose intense colors for visibility.  I have found that red, orange and black are good paint colors.  In the right set up intense yellow also stands out but it isn't as visible as you would expect.

Painted planes are harder to repair without leaving a scar than planes with the colored packing tape over laminate.

​I like to night fly and the LEDs can't shine through a painted plane like they can through the clear laminate and packing tape.  If I am building a night plane I leave most of the plane without paint or colored packing tape. 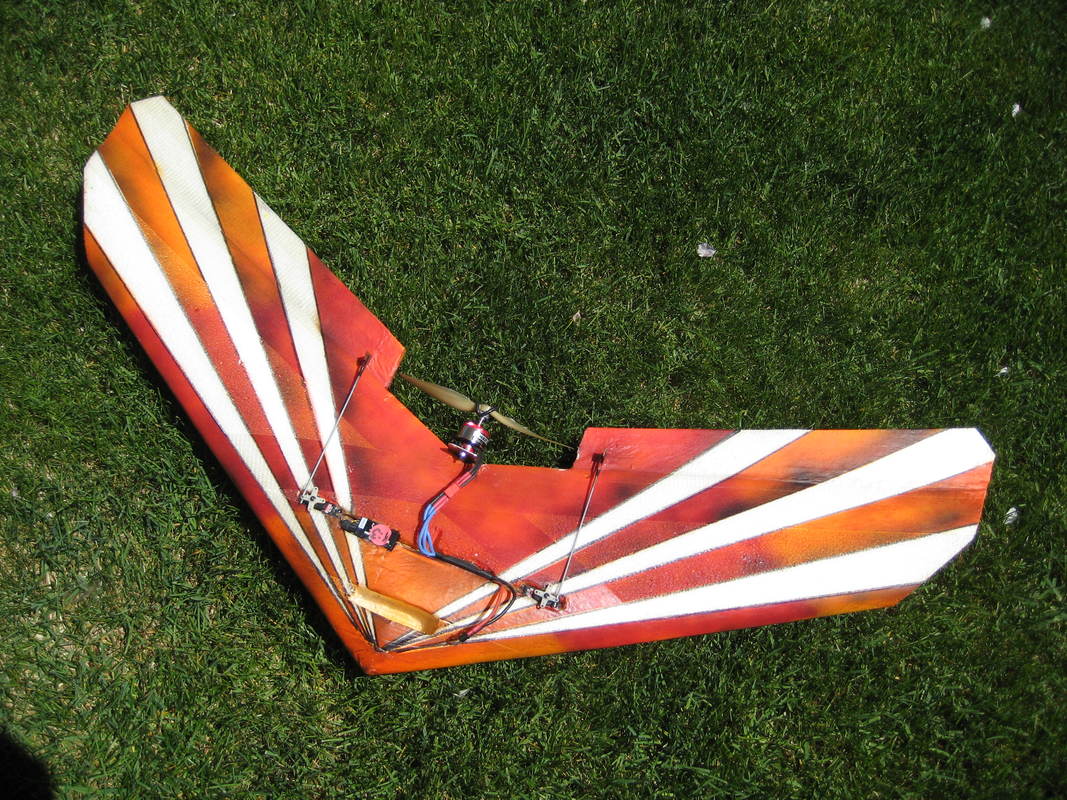